Our Mural by Jordi Bonet

Diploma in Theology and Ministry

Tuition and Other Fees

Tuition and Other Fees

See our location in Google Map

Make a Gift to QC

Our Mural by Jordi Bonet 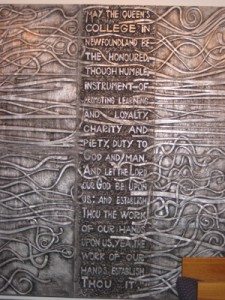 The metal artwork executed for Queen’s College by Jordi Bonet is an eloquent proof that a modern composition, essentially abstract, can nevertheless carry a theme easily recognizable:  Faith, Hope, Charity.

The various textures serve as a background and in the midst of lines, grooves, reliefs, the figurative elements stand out clearly projecting their meaning, subtly and yet unmistakably.

The object of our faith, God Almighty, is represented by the only symbol of perpetual continuity, the circle, which has no beginning and no end, encompassing in its oneness the mystery of the Holy Trinity, depicted by a triangle. The unity within the Trinity could not have been expressed in a simpler yet more forceful manner.

The hope that sustained the past, guides the present and shines on the future is beautifully expressed in the words of Bishop Feild, found on the right of the mural. The words chiseled in the metal and in the hearts of past, present and future generations …

On the left, two pairs of hands. Two hands serene, open; the other two anxious, anguished, extended: they speak of charity, of the material aspect of giving and receiving, of the intangible needs fulfilled by this act of love.

Even the abstract textures of the background have a purpose. The lines originating in the circle, the Creator, embrace the entire artwork like sunrays that warm our lives or like paths that bring our lives to God. Some are long, some are short, some are straight, some are tortuous, reminding us that though no two lives are alike they, nevertheless, emanate from the same source and share the same destiny, God.

It is a modern artwork especially conceived for a modern building. Through the complete integration of both, future generations will look at an exponent of the art and the architecture of the 1960’s.

The artist is Jordi Bonet, internationally known artist, sculptor and muralist. He was born in Barcelona, Spain and lost an arm during the Spanish Civil War.  His work in ceramics, stained glass, aluminum, etc. can be seen in many parts of North America e.g. Place des Arts, Expo, North America Tower, (Toronto), Chapel in Kennedy Airport, Student Union Building (Alberta), St. Anthony Hospital (Nfld.), Halifax North End Library, etc. This mural in Queen’s is cut in aluminum with a knife and took seventeen months to execute.